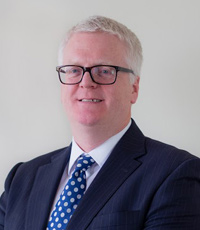 Charlie Shiels, 53, is Executive Director of Central Operations for DPD UK, a major player in the express parcels market and a subsidiary of French postal operator, La Poste. The company operates two brands in the UK, DPD and Interlink Express and employs 9,440 people.

With Technical, Legal and Operational responsibility, Charlie leads from the front and is happiest when his sleeves are rolled up and he is talking to drivers or mechanics. A career operator, his industry knowledge is extensive and fully dedicated to creating the best and most technically advanced operation in the express parcels market.

Charlie lives in Worcester with his wife and three children.