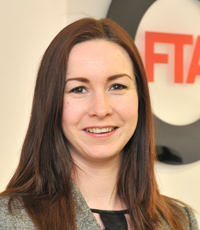 Natalie is Head of Policy for London, South East and East of England for the Kent-based Freight Transport Association.

The FTA is one of the UK’s largest trade associations, representing the transport interests of over 15,000 companies moving goods by road, rail, sea and air. FTA members operate over 200,000 lorries – almost half the UK fleet as well over one million of the three million vans registered in the UK.

Natalie read Law at the University of the West of England in Bristol and graduated in 2003 joining FTA later the same year.

She played a central coordination and communication role in the management of freight and logistics for the London 2012 Olympic Games and has also been a vocal campaigner for the construction of a new Lower Thames Crossing and a long-term solution for Operation Stack in Kent.